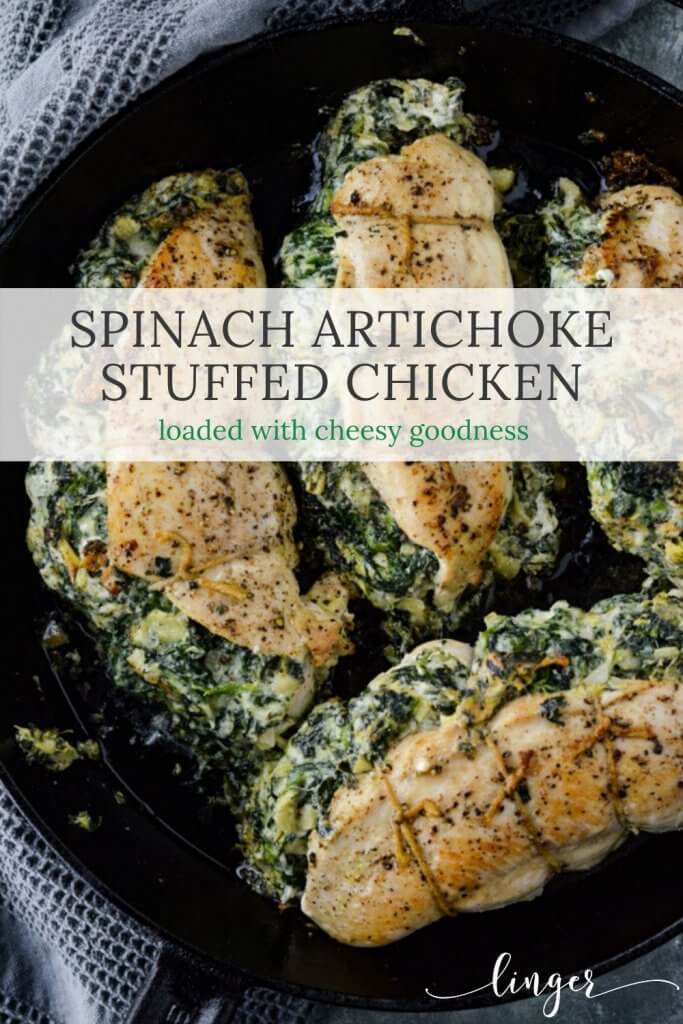 Tender and juicy chicken breasts are stuffed to the brim with everyone’s forever favorite dip: spinach artichoke. Fresh mozzarella, tangy goat cheese, and grated parmesan elevate this dish to cheesy perfection. Pull up a chair, grab a fork and delight yourself in one of the best Stuffed Chicken Breast Recipe.

The BEST way to turn boring boneless chicken breasts into one spectacular dinner entrée for your family begins with a cheesy spinach artichoke dip which is enveloped by juicy and perfectly seared breasts of chicken. This indulgent dish will have you reaching for the recipe over and over to plate and serve on your table any day of the week.

So … let’s get this show on the road because I’m definitely in “hungry” mode.

Squeeze all the liquid out of the artichokes and thawed spinach: I can’t emphasize this step of the recipe enough. It will either make or break the finished dish.

You’ll want to completely thaw the spinach otherwise it will hold on to liquid and release it when cooking. Once it is thawed, drain what you can in a wire mesh strainer. Do the same with the canned artichokes in another smaller strainer. Using your hands press down on both the spinach and artichokes releasing as much liquid as possible through the strainer.

Next, chop the artichokes and use cheese cloths to squeeze all the remaining liquid out of these two ingredients. You want them to be as dry as you can get them. Twist and squeeze them several times. If you don’t have cheesecloth, you can use a good amount of heavy-duty paper towels, which I’ve done before and it works fine.

Fresh Mozzarella: Grab the fresh pillowy white ball of mozzarella out of the gourmet cheese section of your grocery store. This type has a soft, buttery texture with a mild and delicate flavor that pairs well with the other cheeses. Grating it is a little more difficult because it’s so soft, therefore, watch out for your fingers when sliding it down the grater.

Parmesan Cheese: Don’t reach for the processed green can or the pre-grated parmesan cheese. You can either buy the wedge that is pre-packaged or you can have the deli cut you off one from their block. To get the best flavor from parmesan, grate it just prior to using it.

Also, instead of throwing out the rind, throw it in a freezer ziplock bag and use it in soups, stews, or sauces to enhance their flavors.

#3 Mixing all the ingredients for the dip in one bowl

Spinach, artichokes, all three kinds of cheese, chopped garlic cloves, onion salt, kosher salt, and black pepper: all of these simple ingredients add to the overall flavor of the stuffed chicken breast recipe. And the ease of throwing them all in one bowl is the perfect remedy for a messy kitchen.

You’ll want to get your hands “down and dirty” into the middle of this mixture until all of these ingredients are thoroughly combined.

The trickiest part of this recipe is cutting and tying the chicken, which in all honesty is not tricky at all, it just takes a little time.

Use large, thick, boneless, skinless chicken breasts: For butterflying meats, use a boning knife that has a thinner, tapered blade which makes controlling the chicken breast a lot easier.

Place your hand flat against the chicken breast. From the thin side, slice horizontally into the chicken slicing it in half but stopping about a half-inch from the opposite thicker side. Open up the chicken breast like a book. Now you’re ready to stuff it. Click on this link for “how-to” instructions on butterflying a chicken breast.

In order to cook evenly, lay the chicken breast between two sheets of plastic wrap and pound out the meat so it’s all the same thickness.

Use 1/4 of the spinach artichoke filling for each breast: Before stuffing, generously salt and pepper each side of the butterflied breast. Spoon the mixture over one side and flip the other side over the stuffing. It’ll seem like too much mixture for one breast, but believe me, once it comes out of the oven, the ratio between filling and chicken is perfect.

Use kitchen twine for tying. All you need is three pieces of twine per breast, one for the center and two for the outer edges (see photo below).

Use a large, heavy-bottomed, oven-proof skillet. A cast-iron one works great. Set the skillet on a medium-high heat stovetop and let the skillet become very hot. Add a couple of tablespoons of olive oil, heat to almost smoking, and place the stuffed chicken breasts in the pan. Sear for two minutes on one side, turn, and sear for another two minutes.

Remove the pan from the stovetop and place it in a preheated 350°F oven. Bake in the oven for 20-25 minutes until the internal temperature reads 158-160°F. Pull the skillet out of the oven and the chicken will continue to cook reaching a temperature of 165°.

What to serve with this Chicken Dish

My favorite is to place it on a bed of cooked brown rice. The nutty flavor and the firm, chewy texture of the brown rice is a perfect complement to the tender juicy chicken and the creamy cheesy spinach artichoke stuffing. And honestly, that’s a meal in itself.

My husband eats keto most of the time, so to accommodate him with this dish, I serve it on a bed of cauliflower rice and let me I tell you, he is in keto heaven.

And there you have it – an irresistible mouthful of savory scrumptious-ness!! What are you waiting for? You’ll give your family so much joy when you make this dish that they’ll clean the kitchen for an entire week. Well, no guarantees on that, but they SHOULD!

If you love this Spinach Artichoke Stuffed Chicken Breast Recipe, you’re gonna want to check out these as well:

Chicken and Waffles with Peppadew Jam

An Aviation Cocktail Recipe from the 1900’s pre-prohibition era that merges gin, Creme de Violette Liqueur, fresh lemon juice, and Maraschino Liqueur to create a drink displaying a gorgeous purple hue. This classic craft cocktail hints at a delightful floral touch with a balance of both sweet and sour. Even though it is a quick…

END_OF_DOCUMENT_TOKEN_TO_BE_REPLACED

Butter and Whole Cream. Ingredients that give meaning to words like “comforting” and “satisfying.” Here you will find a recipe where chicken tenders and potato wedges swim in a luscious rich sauce kissed with lemon and white wine. This Creamy Lemon Chicken is a dreamy temptation that will have you craving it long after the…

END_OF_DOCUMENT_TOKEN_TO_BE_REPLACED

This Berry Mojito Cocktail is a wonderful summertime libation that highlights a raspberry and blackberry-infused white rum. This delightful cocktail hints at a tartness of fresh lime juice and muddled mint leaves. An impressive but simple mixed drink displaying layers of refreshment. Summertime and Friendships Ahhhh! Summertime! I love evenings after a long, hard day,…

END_OF_DOCUMENT_TOKEN_TO_BE_REPLACED

For the love of Summer,  warm weather, and the great outdoors! Memorial Day, Fourth of July, and Labor Day, all share a common denominator – food with friends and family. Here you will find fabulous cookout food ideas that include plenty of main and side dish recipes, appetizers, salads, cocktails, and desserts, everything you need…

END_OF_DOCUMENT_TOKEN_TO_BE_REPLACED

If you are looking for an elegant side dish or appetizer to compliment any dinner party menu, Prosciutto Wrapped Asparagus will be your go-to recipe. This is a super easy, make-ahead dish to go alongside salmon, chicken or pretty much any entree you’re serving. And of course, the prosciutto is what literally holds it all…