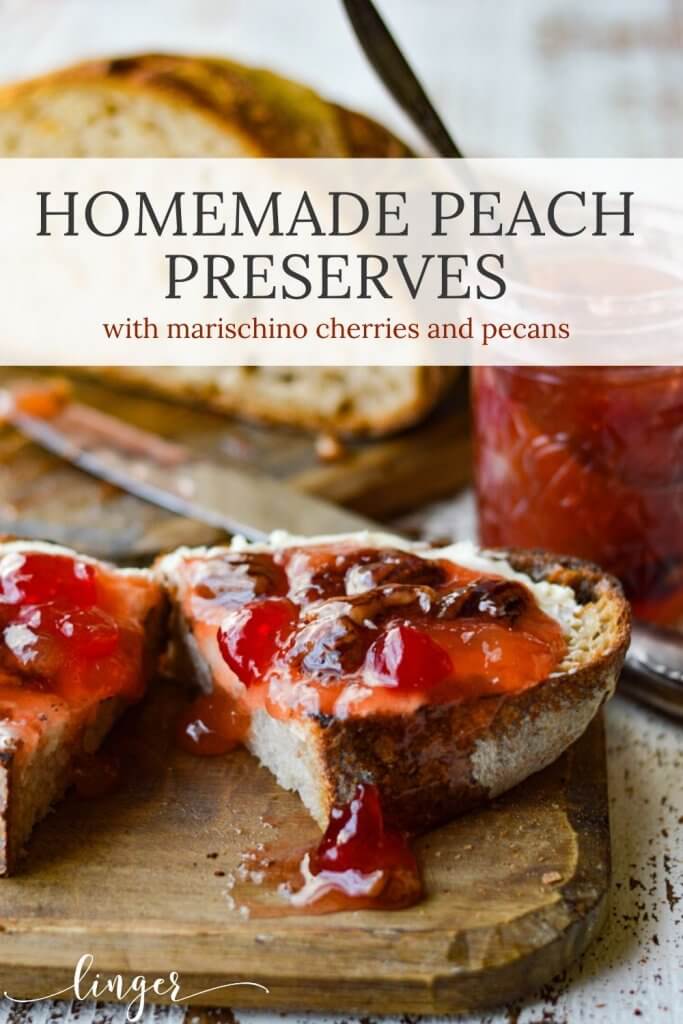 Crusty bread, real butter and a heaping spoonful of Homemade White Peach Preserves with Cherries and Pecans. The cherries and pecans are what give these preserves an added twist and transport them to a whole new “canning” dimension. Not only does it taste scrumptious, but the jars themselves are a beautiful presentation for a homemade gift idea.

The last time I remember canning these Homemade Peach Preserves with Cherries and Pecans was back in the Fall of 2008. My mom and my daughter in law (although I consider her my own) and I ventured one Saturday to an apple and peach orchard. We spent the whole afternoon “hunting” luscious fruit as we meandered through the low hanging, heavy-laden branches. The experience of “U-Pick Orchards” is more than fruit gathering. It’s the wonder of nature, the aroma of freshly picked fruit, and an adventure shared with those you love. We were like giggling little girls that day, peach juice dripping from our chins and forearms as we indulged under a shaded canopy of peach trees.

Sweet Memories of Times Gone By

Since then, my mom has passed and I’m left reminiscing about “U-Pick Orchards” and my Momma’s homemade peach preserves. So I decided to spend the day in honor of her. I ended up at a remote peach orchard about 30 minutes from my place. It was a quiet early morning in the middle of the week and not a soul was to be found. Hovering over the day were sweet memories of times gone by spent with my mom. My takeaway from the stillness of that morning: Make memories while you can, because all too quickly they’re gone.

Searching for the Homemade Peach Preserves with Cherries and Pecans Recipe

I still have in my possession all of my mom’s prized cookbooks. So I began to search high and low for her beloved Homemade Peach Preserves with Cherries and Pecans recipe. With peaches galore surrounding me, I went through every handwritten note stuck in the back of a cookbook and every recipe card that I could find of hers but I came up empty-handed. So I had to revert to memory. I tried and re-tried a few variations. Then as I sampled the last batch, there it was!! The taste of sweet memories. So, I offer to you this long-standing, sentimental, and cherished peach preserve recipe.

First Step – Peel the Peaches with a Hot Water Bath

The first step in canning these preserves is to peel the peaches. This can be a tedious job without the help of blanching in a pot of boiling water for about 30-40 seconds. Then these little babies are plunged into an ice water bath for few seconds to stop the cooking process. Voila, the skins peel away like magic, well, with a little assistance from your paring knife. Once you pull them from the cold water, cut around the peach from top to bottom to top again to split them in half. Twist, and take out the pit. Using your paring knife grab ahold of the soft skin and remove. It’s as easy as 1 2 3. As simple as, Do Re Mi, A B C, 1 2 3. Baby you and me! Sorry, I just got a little carried away.

There’s a Difference Between Jams and Preserves

The ratio of sugar to fruit seems a little excessive, but believe me, in the end, you’ll discover a sweetness in the jar that will kiss your tastebuds. And, actually, you need a large amount of sugar to get the preserves to a thickened state when cooking. After the peaches are peeled, cut them up in pretty large chunks because the cooking process will reduce their size.

There is a difference between jams and preserves. Jam is a spread made from the fruit pulp or the whole “crushed” fruit. Preserves, on the other hand, have large chunks of fruit that rests in a jam-like substance. In this recipe, I combined 8 cups a chunked fruit to 6 cups of sugar and let sit in the refrigerator overnight. I stirred the peaches every once in a while to make sure the sugar completely dissolved.

Cooking the preserves is the time-consuming element in this recipe. An important part of the process is to cook them over a lower heat to begin. Start with the peach/sugar mixture in a large Dutch oven and add 1/2 cup of lemon juice. A wide, thick, heavy bottom pan works best as to not burn the peaches while you’re cooking them. Over medium heat cook for 35 minutes, stirring occasionally.

Add the maraschino cherries and turn the heat to medium-high, stirring constantly for about 10 minutes or until a candy thermometer reaches 218°-220° F. Also be extremely careful because once the mixture starts to thicken it will spit and splatter a bit. I have a few burn marks on my hands and forearms because I chose not to wear a kitchen mitten. You’d think I’d learn, but obviously not.

There’s an interesting “spoon test” that I decided to experiment with after reading this post from Serious Eats. I put several spoons in my freezer while the peaches were on the stove. Once the mixture reached the 218° F temperature, I removed the pot from the burner as to not continue the cooking process. I took a frozen spoon out and dipped into the preserves. Laying the dollop filled spoon on a saucer, I put it back in the freezer to let it sit for 5 minutes. When I pulled the spoon back out and titled it, I watched for the preserves to hold their shape somewhat and not run off the spoon immediately. I had to try this “spoon test” a couple of times before it had the consistency that I was looking for. So I returned the pot to the burner. It had cooled down a bit, so I brought the temperature to 220° F and retested. Perfect. At this point, I added the whole pecans. I was ready to bring in my pint jars.

Sterilizing the Jars and Lids

Before I ever start with canning, I sterilize my jars in the dishwasher and pull them out when I’m ready to fill them. I also sterilize my lids by simmering them in a small pot of water while the preserves are cooking. Some canning instructions say this is unnecessary if you’re going to boil the filled jars in the canner for more than 15 minutes. I didn’t want to take any chances as this is the process that destroys bacteria which can cause food poisoning.

Ladle the hot preserves into the jars, leaving a headspace of about 1/2 inch. With a damp paper towel, clean the rim of the jars for any spilled preserves. This will provide a solid seal. Remove the lids one at a time from the simmering water, wipe with a dry paper towel and place it on the jar. Screw on the rings but not too tight. Twist with your fingers until you feel resistance. Make sure and use a kitchen mitten because the jars are extremely hot.

While the preserves are cooking, fill a canner with water about halfway full and bring to a boil. At the same time have a reserve pot of boiling water to use in case you need more in the canner. Once the jars have been filled and the lids screwed on. Place the jars on the canner rack and lower into the boiling water. The water should be at least 2 inches above the jars. Boil for 20 minutes. Remove from the heat, raise the rack, and let the jars sit above the water for about 5 minutes. Using a jar lifter, pull them from the canner and set them on a dishtowel.

Making Sure the Jars are Sealed

Then the popping begins. Literally, when the lids start to seal, you will hear them pop. But don’t get paranoid if you don’t hear them right away. Sometimes it takes a little bit of time and some are not as loud as others. To verify that the jars are sealed, press down on the lid and if it doesn’t bounce back, you know it’s done its job. If you find one that has not sealed properly, no big deal. That just means you get to enjoy the fruit of your labor immediately and what could possibly be wrong with that. Unsealed jars need to be refrigerated and eaten within 3 weeks.

Let the jars cool undisturbed for 12 to 24 hours.

Indulging in Homemade White Peach Preserves with Cherries and Pecans

Now it’s time to indulge! You can’t eat Homemade Peach Preserves without crusty bread and real butter. It’s just sacrilegious. Well … okay, truth be known, I’ve actually opened a jar, stood at the counter and ate half a pint with a spoon. I love the maraschino cherries and the pecans. They’re the added bonus. In my opinion, that’s what makes these jars so heavenly.

If you love peaches, you will love these recipes:

Crusty bread, real butter and a heaping spoonful of Homemade White Peach Preserves with Maraschino Cherries and Pecans. Not only does this taste scrumptious, but the jars themselves are a beautiful presentation for a homemade gift idea.

An Aviation Cocktail Recipe from the 1900’s pre-prohibition era that merges gin, Creme de Violette Liqueur, fresh lemon juice, and Maraschino Liqueur to create a drink displaying a gorgeous purple hue. This classic craft cocktail hints at a delightful floral touch with a balance of both sweet and sour. Even though it is a quick…

END_OF_DOCUMENT_TOKEN_TO_BE_REPLACED

Butter and Whole Cream. Ingredients that give meaning to words like “comforting” and “satisfying.” Here you will find a recipe where chicken tenders and potato wedges swim in a luscious rich sauce kissed with lemon and white wine. This Creamy Lemon Chicken is a dreamy temptation that will have you craving it long after the…

END_OF_DOCUMENT_TOKEN_TO_BE_REPLACED

This Berry Mojito Cocktail is a wonderful summertime libation that highlights a raspberry and blackberry-infused white rum. This delightful cocktail hints at a tartness of fresh lime juice and muddled mint leaves. An impressive but simple mixed drink displaying layers of refreshment. Summertime and Friendships Ahhhh! Summertime! I love evenings after a long, hard day,…

END_OF_DOCUMENT_TOKEN_TO_BE_REPLACED

For the love of Summer,  warm weather, and the great outdoors! Memorial Day, Fourth of July, and Labor Day, all share a common denominator – food with friends and family. Here you will find fabulous cookout food ideas that include plenty of main and side dish recipes, appetizers, salads, cocktails, and desserts, everything you need…

END_OF_DOCUMENT_TOKEN_TO_BE_REPLACED

If you are looking for an elegant side dish or appetizer to compliment any dinner party menu, Prosciutto Wrapped Asparagus will be your go-to recipe. This is a super easy, make-ahead dish to go alongside salmon, chicken or pretty much any entree you’re serving. And of course, the prosciutto is what literally holds it all…