This homemade pizza with raspberry jalapeño sauce is truly a gourmet treat that inspires simple indulgence. The aroma emanating from your kitchen because of this yeasty homemade dough and the pizza’s flavorful toppings will fill your senses with pure anticipation. Between the tender chunks of chicken, goat cheese, caramelized onions, and fresh cilantro, it makes for one of the most delectable homemade pizzas. 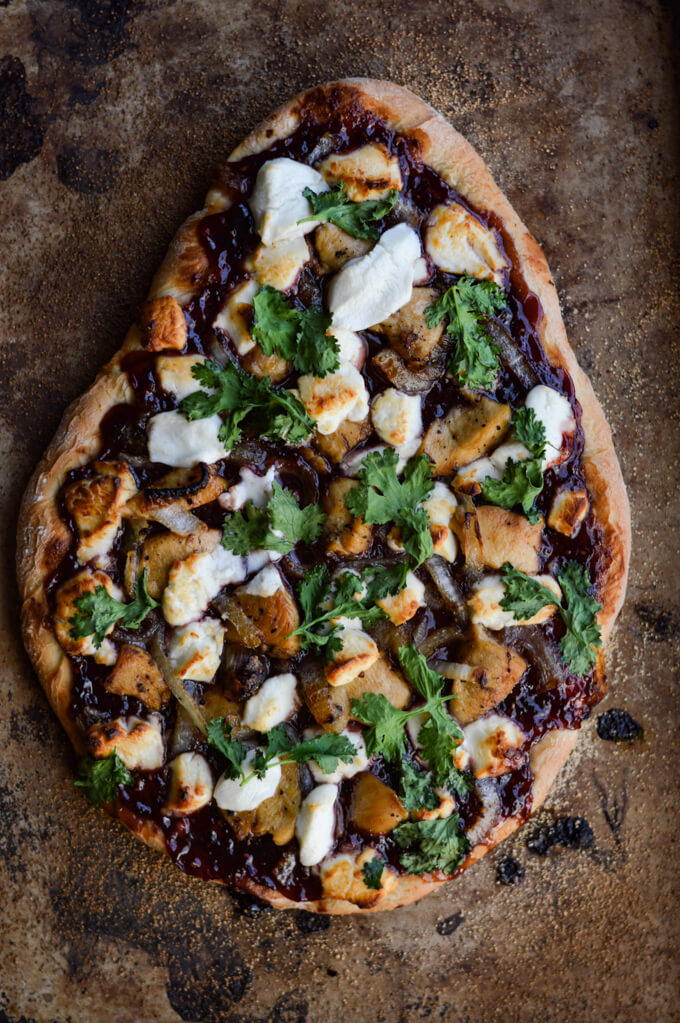 I was inspired to re-create this pizza after my husband I spent a relaxing afternoon at a local winery outside of Kansas City. We ordered from the menu at the direction of our waitress, a little hesitant because it was so out of the norm of a traditional pizza. And of course, we ordered the recommended bottle of wine to go alongside, after all, it is a winery. When it was delivered to our table and we took our first bite, both I and my husband said it was one of the best and most unique pizzas we’d ever tried.

So I set my hand to re-construct this little bit of heaven. And what emerged from my kitchen was pretty dang close to the original. So … I give you this Chicken with Raspberry Jalapeño Sauce Pizza with all the fixin’s. 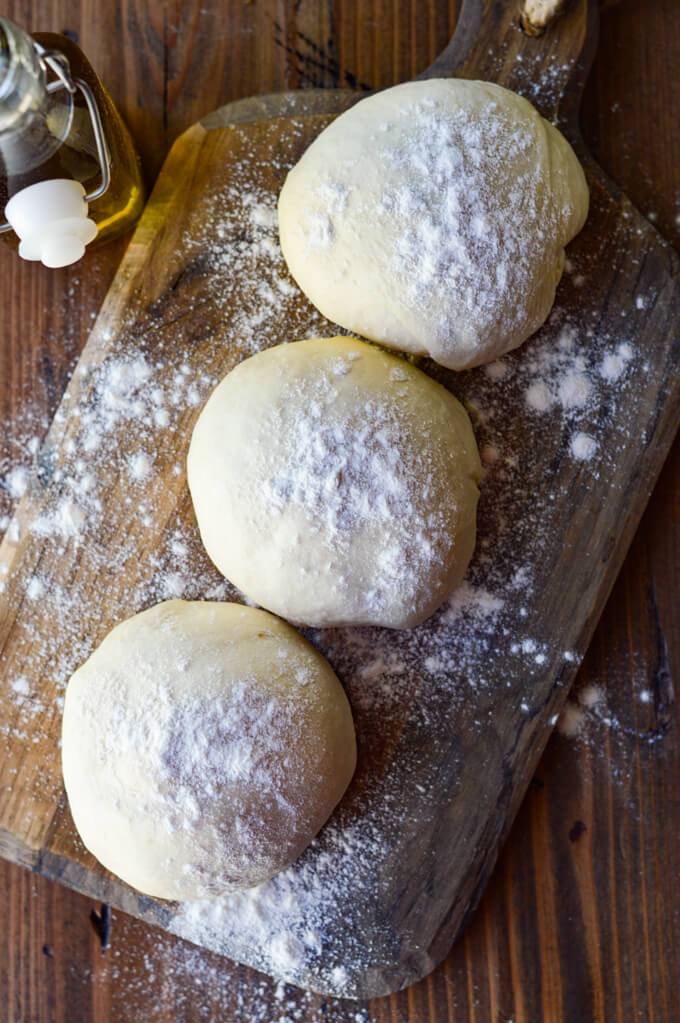 Homemade pizza dough is the foundation of a great pizza.

The foundation of a perfect homemade pizza is most definitely the crust. Nobody likes a soggy crust! So I have the perfect one for you that is both crispy and chewy. You can find my recipe with step by step instructions here.

If time doesn’t permit, you could buy pizza dough already made up at your local grocer. I’ve tried them myself and they’re okay, but they really don’t hold a candle to homemade. If you’re willing to take a little bit of time and give some effort to making it, I’m pretty convinced you’ll never go back to storebought. 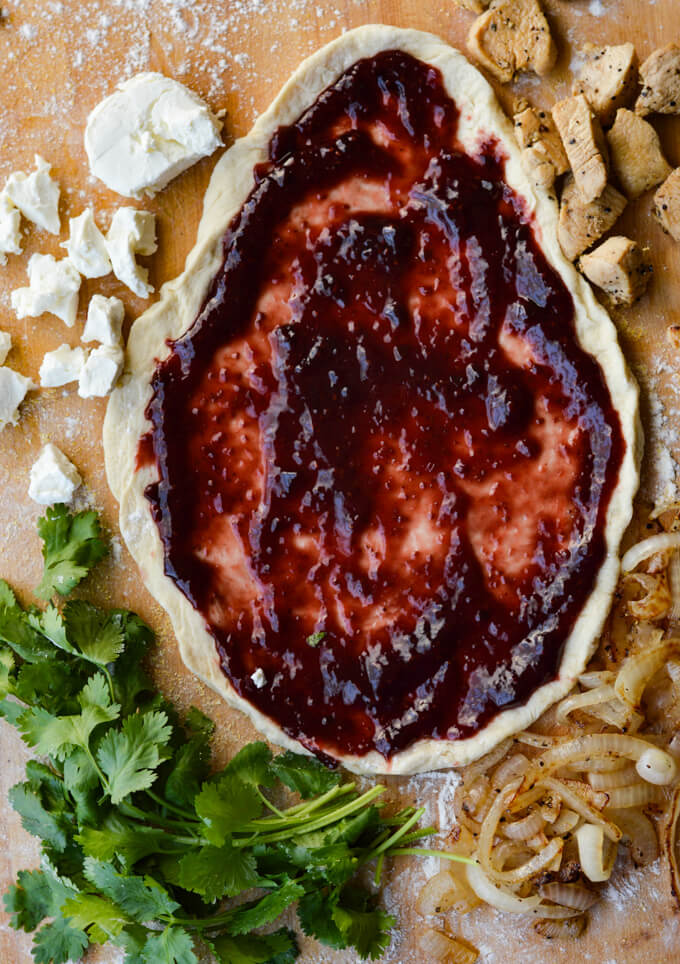 Let’s talk about the good stuff – all the Toppings.

Raspberry Jalapeño Sauce. Who’d a thought? But let me tell you, this sauce exalts this pizza into a sumptuous category all its own. Both sweet and spicy, it complements the rest of the toppings while bringing the entire pie into a perfect balance of taste.

I found this bottle of lusciousness on the shelf of my grocery store. Somewhere in the near future, I’ll venture to create it myself,  but the convenience of just opening a bottle is definitely worth the cost. 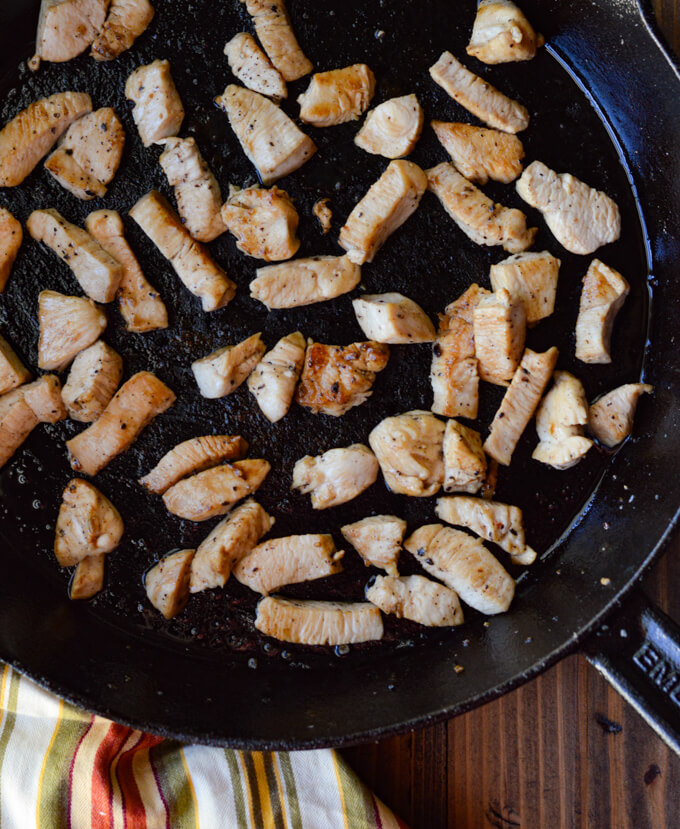 The chicken seemed to me to be the best companion for the other ingredients. The texture and flavor of chicken work well with everything else. You could also use pork loin that is cut into small cubes as well. A fruit sauce is a perfect blending with either of these meats.

Chicken can be a tricky meat to cook, especially when the pieces are small. Anytime you cook chicken too long, it becomes dry and tough. The key is to start out with a really hot cast iron skillet, add a tablespoon of avocado oil (because of its high smoke point), add the chunks of chicken and turn the burner down to medium-high.

Don’t crowd the chicken because you want to sear not steam them. Quickly cook the chicken for a total of about 4 minutes. Turn them every minute or so. Remove from the skillet and set aside for later. 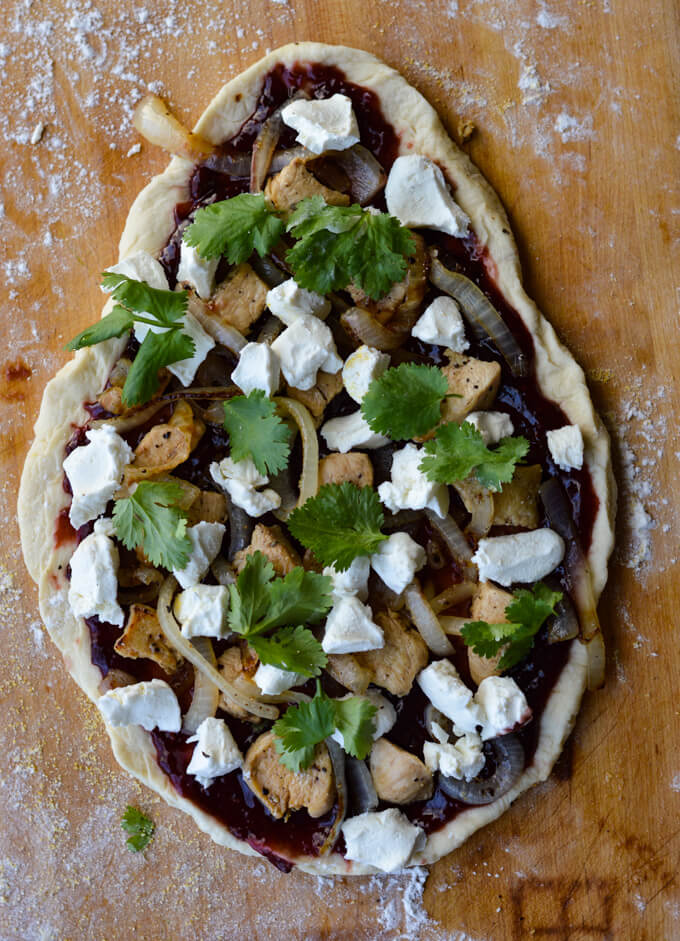 I want to kiss whoever came up with the idea of caramelized onions. They’re one of my ALL-TIME FAVORITE additions to pretty much any recipe that I can get away with including them in. And what smells better than onions browning on the stove? It’s a sensory delight. And of course, the taste, well, it is rich and satisfying to the palate.

Choose the Vidalia onion or one that might be labeled “sweet” onion. These onions, in particular, are naturally sweet and their distinctive sugars come to the surface when cooked on medium-low heat for a long period of time.

Start out with a heavy large bottom skillet with the heat turned to high. When hot, add olive oil to coat the bottom of the pan and add your sliced onions. Stir well to coat the onions and turn the heat down to medium and cook for 10 minutes, stirring frequently as not to burn. Add salt and turn the heat down to medium-low and continue cooking for about 20 more minutes, stirring occasionally, until the onions are soft and nicely browned.

In my opinion, you can never go wrong with goat cheese. The fusion of it with the raspberry sauce and onions is explosive in your mouth. Goat cheese has a creamy texture with a tangy taste. I add it to the pizza last (except for the cilantro) so it will melt into all the crevices of this pizza. 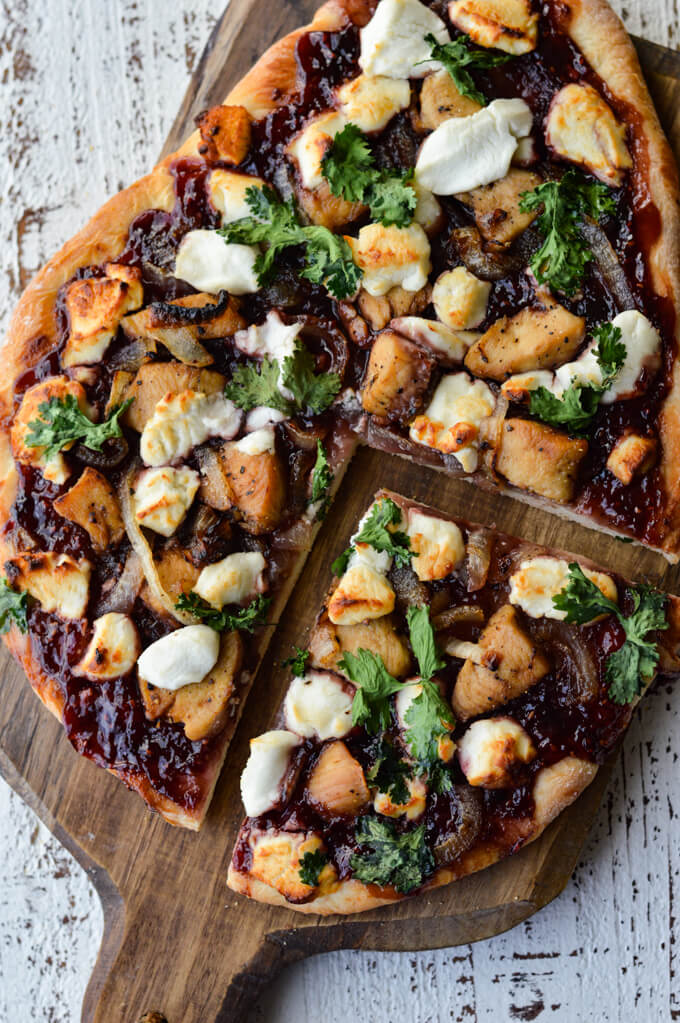 Cilantro adds a fresh, crisp and citrusy flavor to any dish. It’s the final touch on this raspberry jalapeño chicken pizza. I originally added it before I cooked it, but realized it would shrivel away and be a non-item by the time the rest of the pizza was done. So I removed it and added it immediately as it came out of the oven. It was the perfect heat to release the flavor of the herb on the rest of the pie.

To pile on the toppings or not? That’s the question.

I know, most pizza experts say “little” is better when it comes to sauce and toppings. But honestly, I cannot help myself when I’m adding them. It’s like a salad, I start out really small and by the time I’m finished I have a mountain in front of me to consume. But pizza toppings and how much to add are all about personal preference. I love to taste every ingredient in one mouthful, but others want a more subtle bite. I say … to each his own! My only suggestion is to make sure the crust is durable and not flimsy, otherwise, the toppings will be all over your plate instead of the crust when you pick it up. 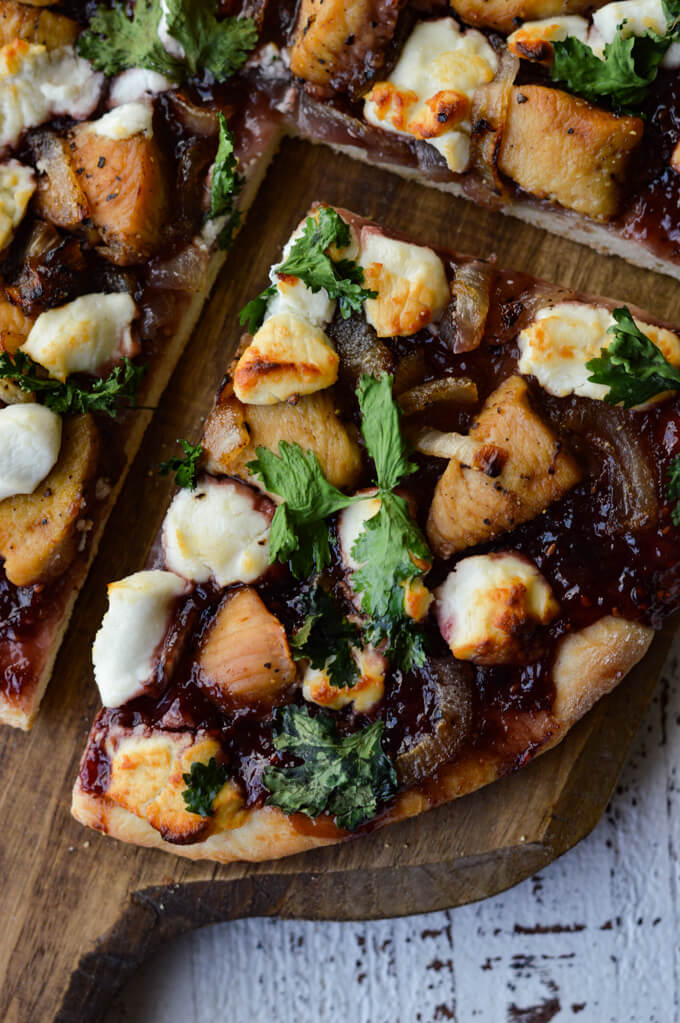 Look at this luscious piece of pie right here! It’s making my mouth water just thinking about it. Pizza is definitely one of life’s simple and delectable pleasures. And homemade is much better than carry out, in my opinion anyway. Truth be told, it’s a very easy endeavor to make it from scratch (and soooo much cheaper)!

Let me know what you think about this pizza by leaving me a comment below. I would love to hear from you!

Also, if you’re looking for another great gourmet pizza check this one out – Mediterranean Pizza with Lamb and Pesto Sauce.

This homemade pizza with raspberry jalapeño sauce and tender chunks of is truly a gourmet-ish treat that inspires simple indulgence. 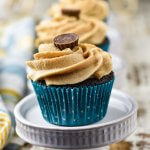 The blending of a rich dark chocolate cake and the creamy deliciousness of peanut butter frosting makes for the most amazing Chocolate Peanut Butter Cupcake in the world. If you love chocolate and peanut butter (and who doesn’t), you’re gonna go bonkers over this outrageous sweet snack. There’s even a little peanut butter surprise tucked…

END_OF_DOCUMENT_TOKEN_TO_BE_REPLACED 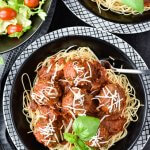 END_OF_DOCUMENT_TOKEN_TO_BE_REPLACED

If there was ever a “soup for the soul,” this Easy Chicken Tortilla Soup would be it. With loads of spicy shredded chicken, diced tomatoes, black beans, and corn, it brings a healthy and hearty aspect to your table. A homemade recipe with a little kick to warm you up during these chilly evenings. Boy,…

END_OF_DOCUMENT_TOKEN_TO_BE_REPLACED 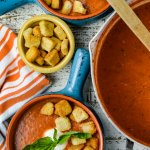 A healthy-ish recipe that is both hearty and comforting and has loads of nutrients and antioxidants. But more than that, this “warm and cozy” soup will bring back nostalgic memories of your childhood, sitting at the kitchen table with a bowl of tomato soup, school called off and snow falling outside your window. That child…

END_OF_DOCUMENT_TOKEN_TO_BE_REPLACED 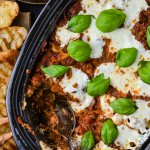 A no-fail lasagna recipe that is super simple because it removes the loathed step of pre-cooking lasagna noodles. You will find layers of flawlessly cooked noodles, a mixture of cheeses and of course, a sauce flavored through and through with spices, fresh herbs, and flavor galore. Slow cooking this pasta dish for a good half…